Civil registration in Germany became mandatory in 1876, depending on the area it could have began as early as the late 1700s. Many of us are familiar with the records starting in October 1874. You will find them not only in Germany but also in places like Poland or other neighboring countries once controlled by Germans. There is no single repository of civil registration records. These records are kept by the Standesbeamte (civil registrar) at the Standesamt (civil registry office). Some older records might be in the State/Local Archives and may even be microfilmed by the Family History Library (FamilySearch.org).

Births were usually registered within a few days of the child’s birth by the father, a neighbor, or the midwife. Sometimes you will find notes in the margin for corrections or additions to the record.

Below is the civil registration of a birth in 1884. We cut the long document in half to give you a better view of the entire document. 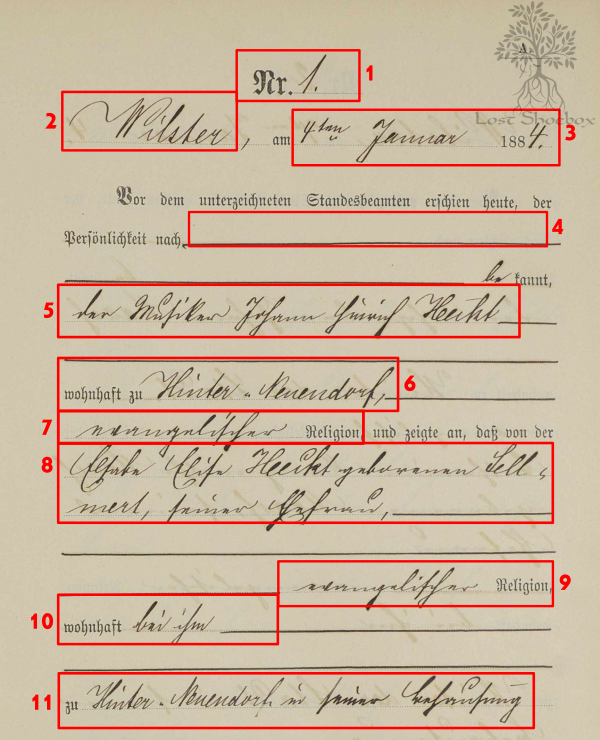 1) Akt number or entry number
2) Location of registration, small villages would have registered at a larger nearby village/town they belonged too.
3) Date of registration (not the date of birth)
4) This area is part of #5, and is not often used but it could include notes like how the person (informant) was identified (ie: ID, witness etc…)
5) This section goes with #4, it tells who the informant was, this was usually the father, it would often include his occupation and name. It sometimes could note his standing.
6) Residence of the father (or informant)
7) Religion of the father (or informant)
8) Mother’s name, her maiden name will often be preceded by something like “geboren” or “geb.” meaning “born”
9) The mother’s religion
10) The mother’s residence, often written “bei ihm” meaning “with him.” This would mean her residence was the same as #6, usually her husbands residence.
11) The residence 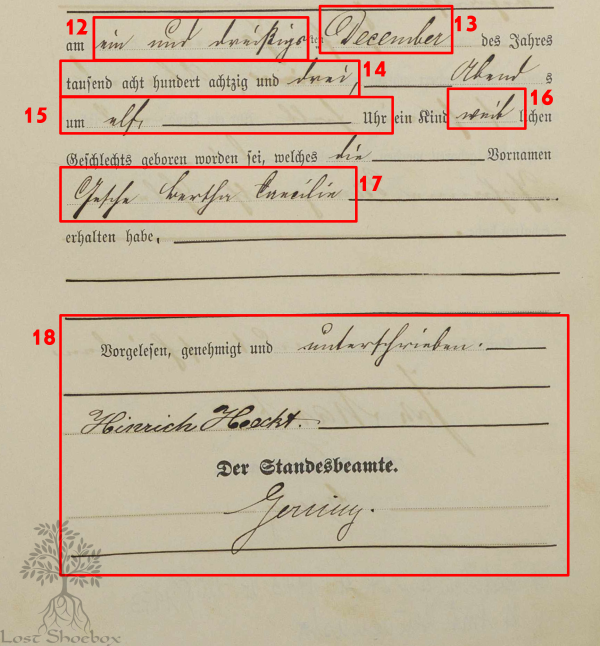